by Beats by Jan 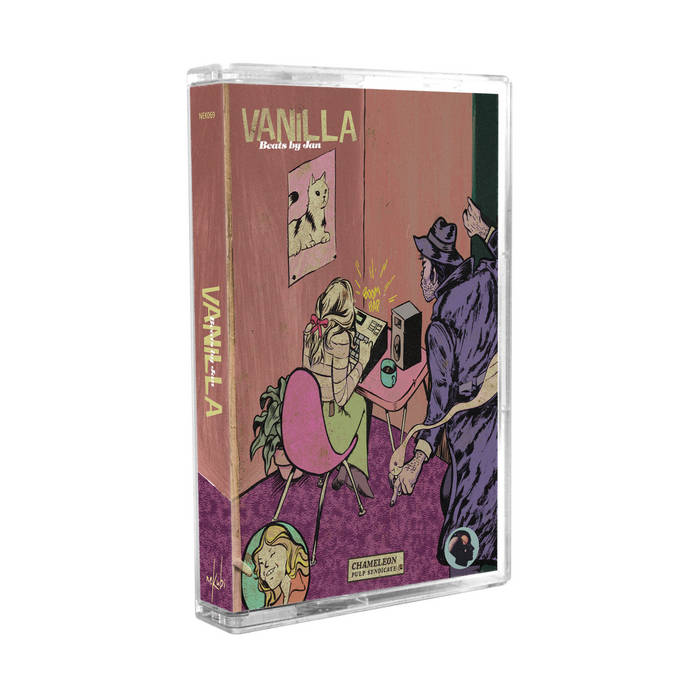 WARNING: in case you would like to purchase just the digital album,
we strongly recommend you to do so directly through the artist's page at: chameleonsessions.bandcamp.com/album/vanilla

US producer Chameleon Sessions is the Catfish among beatmakers. As his name applies, he adjusts to different environments to make any type of beat. Confusing fans with multiple monikers while he’s at it.
Beats by Jan began as a troll post on social media about a fake beat tape. And now, life imitates art: he made an actual Beats by Jan tape, soon to be released on cassette via Greek boutique label Nekubi Tapes.

And it’s a nice one. With most notably “The Silver Beat Matter,” a short story in the style of a 40s detective radio show molded into a beat.

Chameleon Sessions (Noe Montoya) has always been on a search for something different. Whether he was digging through family records to sample or taking out a payday loan to fund his first MPC2000xl, this avid creator has never been afraid of a fresh perspective for any approach. “I don’t have a process or anything I do the exact same each time - and I don’t think anybody should do that, in a creative sense,” he says.

Noe created Chameleon Sessions as a hub for his various sounds and stories. It is the home of monikers like Furcifer, Mushussu and Beats by Jan. These names represent different styles of music, unified by the elusive Chameleon Sessions sound.

As for his most recent release: the project is called Vanilla and it was created by Beats by Jan. The story behind Beats by Jan is an entertaining one. It all started when Noe ordered some Chameleon Sessions stickers online and they arrived with an extra sheet of stickers that didn’t belong to him. They seemed to be labels for somebody’s homemade vanilla extracts that read: “homemade by Jan.” It was that title that reminded Noe of Jan Brady from the Brady Bunch, which then led him to make a troll post out of the whole ordeal. “I took this photo of Jan and made a mock album cover and said that it was a very very dope album and that I couldn’t believe I found this thing,” he says.

Eventually he had to own up and tell everybody that the post was fake, but he already had friends challenging him to make the project real. The Beats by Jan story doesn't end there though, because it still doesn’t fully explain the cover art for Vanilla.”

“So I had this idea for a track called ‘The Silver Beat Matter,’ which was more of a 1940’s type of radio detective show. I asked the homie SpookNovel to do the album artwork - he’s an incredible artist, you should check him out. I told him I wanted to make a poster that looked like a 40s/50s comic book - so the album cover for Vanilla is really an illustration for ‘The Silver Beat Matter,’ which is the story of how there’s this dude who’s inspired to make some beats but he sucks at it. As he’s sitting in his room he hears somebody off in the distance making a beat and he can’t believe how dope it sounds so he has to go search for this person who’s making the beat. I told him I wanted him to be looking down finding her (Jan) making beats.”

You can hear this whole story unfold in Vanilla on the 13th track titled The Silver Beat Matter, where Chameleon Sessions showcases his ability to use voice samples to create strong narratives in his music. “You’ll notice I have so much damn dialogue in my music. But that’s all I’m doing is trying to clarify a message that I have. I want more than melodies and rhythms, and a lot of the dialogue in my music isn’t even samples. Most of it is either me, or my daughters or kids,” he says.

These voice recordings aren’t the only way Noe embeds his personal experiences into his music. For instance, the very last track titled “(Goodnight)” comes from a sentimental mood. “It’s sort of a hidden track on that at the very end - and that’s kind of an ode to my daughter. I was sitting out one night with my daughter and we were stargazing out in the middle of nowhere and we were by a lake so you can hear the crickets and water in that track. That was a really nice memory - we stayed out there for hours. It was cool. I went home that night and started making mad songs,” he says.

Chameleon Sessions’ thoughtfulness can be found throughout Vanilla. It’s full of smooth transitions and warm textures - interludes and skits usher us through wholly diverse tracks. The album opens with a 40s style radio interview where somebody is asked the question: “What do you think vanilla holds for you?” to which the man responds, “I hope it’s dope.” Then suddenly the album’s music begins with the track “Out of the Chasm.” Chameleon Sessions' affinity for transitional elements becomes apparent as the dawning of this track morphs its anticipatory rhodes piano along with its flutes and voices to create a churning rise of textures, melodies and rhythms that set the tone for the following songs. The next track, “Bueno ‘pa Gosar,” introduces some brighter energy as percussion grooves push us along to familiar flute, voice and synth elements. It’s this cohesiveness of tones and arrangements that provide Vanilla’s smooth playthrough. The title track is a perfect example of how this beat smith is able to keep us engaged in the song by continually growing and changing the sounds we hear until our entire listening experience is in a state of transformation.

One of my favorite parts of the album is the complementary tone between the interlude “On Hold for that Grub Cheque,” and the funky groove “Safeway Shopping.” It serves as a perfect introduction for a track that showcases Chameleon Session’s ability to layer drum breaks as effectively as he can drum out unique rhythms. There are other moments on the album like in the track, “The Silver Beat Matter,” where the narrative takes full control and the listener can immerse themselves into another place and time entirely.

After listening through this fourth full length album by Chameleon Sessions, it’s clear that his influence and inspiration is in wide array. It’s interesting how a creator’s “influence,” is absorbed from the totality of his/her life. He told me that he takes huge inspiration from bands like The Flaming Lips and that his mother’s record collection introduced him to bands like Led Zeppelin as much as his father’s record collection helped him discover Mexican groups from the 70s like Los Pasteles Verdes or Los Angeles Negros. He urged me to check out the 2001 project Vocal Studies + Uprock Narratives by Prefuse 73 because it ultimately changed his idea of what a hip/hop beat could be considered. He told me of the 90s rap groups he listened to as well as his more contemporary music influences from labels like Warp Records.

All in all, Chameleon Sessions stays true to allowing himself to be driven by what he is creating. And if you know anything about life, you’ll understand that the creative spirit is always changing. Truly, we can expect something refreshing and different from Chameleon Sessions as he continues to pursue the paths his creations have led him down.

Bandcamp Daily  your guide to the world of Bandcamp